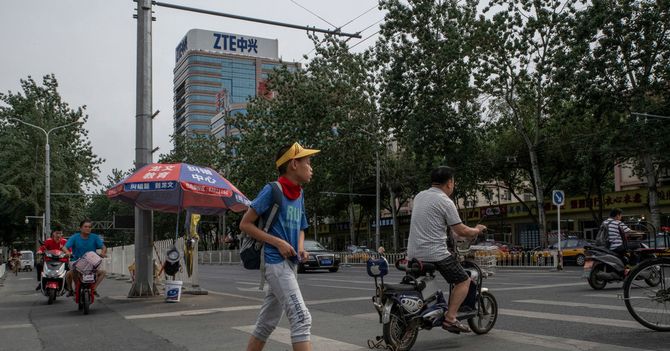 HONG KONG — ZTE, the Chinese technology company, hasn’t seen an end to its troubles despite its lifesaving deal with President Trump — and its investors are all too aware of that.

The company’s shares plunged on Wednesday, losing more than one-third of their value, in their first day of trading on Hong Kong’s stock exchange since the United States government slapped ZTE with crippling penalties two months ago. Nearly $3 billion was shaved from the company’s market capitalization.

“Reversal of the new settlement remains a possibility,” wrote Chris Yim and Xinhe Deng, analysts for Bank of Communications in Hong Kong, in a recent report, “and we believe this would be an overhang for the company.”

The fate of ZTE, which makes telecommunications gear and smartphones, has become a major political issue as Washington and Beijing clash over trade and the future of technology.

In April, American officials prohibited ZTE from buying American technology because it had violated Washington’s limits on selling gear to countries like Iran and North Korea. The order brought ZTE, once seen as an innovative, competitive Chinese company, to a virtual standstill, exposing its dependence on American chips and software.

Last week the Trump administration moved to rescue the company by allowing it to buy American technology again. Under the new agreement, ZTE must pay a fine of $1 billion, replace its senior leadership and allow American monitors to make sure it complies with Washington’s trade limits.

But the deal set off protests from Washington lawmakers, including members of Mr. Trump’s own party, who said ZTE’s transgressions deserved a harsher penalty. A group of senators this week inserted language into military spending legislation that would stymie the deal.

“Great news!” Senator Marco Rubio, Republican of Florida, wrote on Tuesday on Twitter. “Our bipartisan amendment restoring penalties on ZTE is included in the NDAA bill the Senate will be advancing to later this evening.”

A reversal would probably exacerbate tensions between the United States and China. ZTE’s problems are caught up in a broader threat by the United States to levy tariffs on $150 billion in Chinese-made goods, amid accusations that China’s trade practices are unfair. China has vowed to retaliate, leading to worries over a potential trade war.