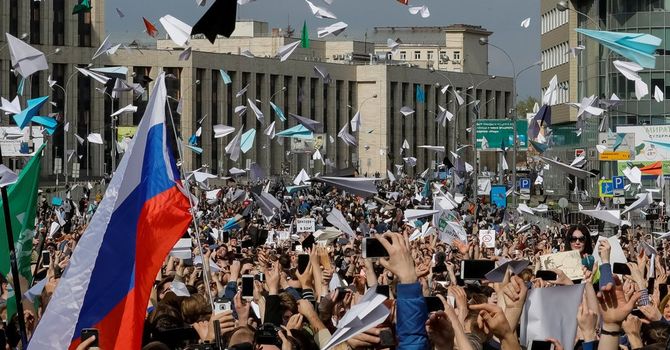 LONDON — Apple was thrust into the middle of a long-simmering dispute on Thursday between the encrypted messaging app Telegram and the Russian government, which has sought to shut down the service since it declined to help Moscow intercept communications sent through its platform.

The allegation from Mr. Durov is significant because it undercuts the importance that Apple’s chief executive, Timothy D. Cook, has placed on privacy and encrypted communication. In 2016, Apple was taken to court for refusing to help the Federal Bureau of Investigation access encrypted messages sent by one of two attackers who killed 14 people in San Bernardino, Calif.

“Russia banned Telegram on its territory in April because we refused to provide decryption keys for all our users’ communications to Russia’s security agencies,” Mr. Durov said in a statement posted to his official Telegram channel. “We believe we did the only possible thing, preserving the right of our users to privacy in a troubled country.”

“Unfortunately, Apple didn’t side with us,” he continued.

Mr. Durov said that while Russia accounted for only about 7 percent of Telegram’s user base, Apple’s move had effectively barred it from updating software for all of its users worldwide since mid-April. He said that had meant Telegram was also unable to fully comply with new privacy rules put in place in the European Union last week.

Apple has run into similar criticism in China, after the company removed virtual private networks, apps that allowed users to avoid the country’s online censorship, from its App Store in China.

An Apple spokesman did not immediately respond to a request for comment on Mr. Durov’s statement.

The situation highlights the messy gatekeeper role Apple plays with its App Store acting as the main way people can download apps, along with Google’s Play store. Apple finds itself caught between the interests of encrypted messaging apps such as Telegram and Signal, which want to prevent anybody from intercepting communications between users, and governments, who want access to messages to identify security risks and other issues.

« Previous White House Slaps Metal Tariffs on Europe, Canada and Mexico
Next » Separated at the border: A mother's story