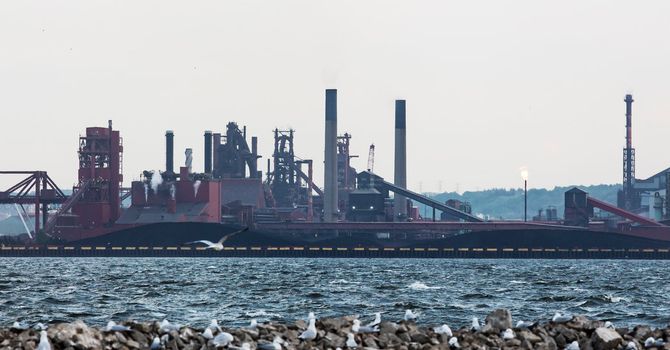 HAMILTON, Ontario — Near a harbor dominated by sprawling steel works, coal piles and a forest of smoke stacks, the crowd at the Galley Pump Tavern in Hamilton had harsh words for President Trump after his imposition of high tariffs on Canadian steel and aluminum.

“It’s insulting. It’s a slap in the Canadians’ face,” said Walter Thomas, who poured molten steel at Stelco, one of the two major producers in Canada’s steel-making epicenter of Hamilton in Ontario, before taking early retirement 13 years ago. “No Canadian wants what Trump is doing. And if gets away with this, what else is he going to ask for? He’s like a little bully, that’s all he is.”

The president’s move has prompted equal parts of anger, disappointment and bafflement here. But infusing it all is fear.

Like auto-making, the steel business has become a continental industry in North America, and the international border is effectively meaningless. But if Mr. Trump’s tariffs effectively restore that barrier and shut Canada out of the United States market, job losses are sure to follow.

Mr. Thomas was part of a small dinnertime crowd on Thursday at the bar and restaurant that has long served steel workers. Sue Sinden, another patron at a table with her sister and two friends, was no more a fan of the president or his action against Canada than Mr. Thomas.

“To say that we’re a national security risk for them, I think that’s crazy,” said Ms. Sinden, who once worked at an appliance factory that has since moved to Mexico and whose husband is retired from Dofasco, now part of ArcelorMittal, the other local steel giant.

“I think of all the jobs that we’re going to lose here and the same thing is going to happen down in the states,” she said. “He’s already alienated all of Europe. Who’s going to stand up with him? Who’s going to support the states anymore?”

“Canada has treated our Agricultural business and Farmers very poorly for a very long period of time,” he wrote on Twitter in an apparent reference to Canadian policies that effectively exclude or severely limit imports of dairy, poultry and some pork products.

He also repeated his contention that Canada has a “really high surplus” on trade with Canada, a claim he acknowledged in March that he made up during a meeting with Prime Minister Justin Trudeau. Canada maintains that assertion holds true only if goods from third countries passing through Canada on their way to the United States are counted as Canadian exports.

Unlike some other industrial communities in Canada, the city of Hamilton with just under 750,000 people has been unusually successful at diversifying its economy as automation and changes in the steel industry steadily eroded its employment base.

McMaster University, itself a major employer, has helped develop businesses in the health sciences while companies in other industries such as food processing have expanded.

And, in a development that is not always embraced locally, people driven out of Toronto by its soaring real estate prices have come to Hamilton to buy homes. While some have built new lives here, many exiled Torontonians head to Hamilton’s striking moderne-style station and commuter trains to travel to Toronto, Canada’s largest city, each morning.

Nevertheless, Fred Eisenberger, the mayor, estimates that about 9,000 people work in steel-making in the city. Another large group of local residents commute to Ford, Toyota and General Motors auto assembly plants in nearby communities that may face disruptions because of the tariffs — both Mr. Trump’s and Mr. Trudeau’s.

“No one’s dismissing this as trivial by any stretch,” he said. “We’ve had our losses in that whole free trade arrangement for sure. Obviously, the current president doesn’t agree and is looking to rejig the economy in favor of the United States. I’m not sure this is going to work.”

Mr. Trudeau’s decision on Thursday to hit back immediately with tariffs is a break with Canada’s approach to trade disputes for decades. In the past, the government would have first waited for Mr. Trump’s measures to be declared illegal under the North American Free Trade Agreement, or Nafta, and World Trade Organization rules — a lengthy process — and then fired back.

The Canadian tariffs of 25 percent on steel and 10 percent on everything else on its list will cover 16.6 billion Canadian dollars ($12.8 billion) worth of American goods — equal to the value of Canadian steel and aluminum exports to the United States last year.

Items on Canada’s list were targeted as a dollar-for-dollar response to the American tariffs and are aimed first at steel and aluminum producers. Canada generally brings in more steel than it exports and the United States has been Canada’s main source of imported steel for decades.

Other items on Canada’s list seem calculated to pressure Mr. Trump’s political allies or erode his position in critical states. Chocolate’s appearance on the list may be to provoke irritation in Pennsylvania, the home of Hershey and a state Mr. Trump won in the 2016 presidential election, but where his support may now be weakening.

Also on the list is fresh orange juice. It mostly comes from Florida, a state the president won narrowly in 2016.

Mr. Trudeau’s list does not go into effect until July 1, suggesting that it may be mainly about getting Mr. Trump to back down on his measures.

Some people in Canada want their government go further. Since first announcing the steel and aluminum tariffs back in March, Mr. Trump has tied them to reaching a quick agreement at talks on Nafta.

Jean Simard, the president of the Montreal-based Aluminum Association of Canada, said Canada should pull out of those negotiations until Mr. Trump backs off on his tariffs.

“We’re just a piece in a larger chess game,” Mr. Simard said of his industry’s current situation. “The Canadian government has always been very clear that we will not negotiate with a knife to our throat.”

For Hamilton, Mr. Trump’s tariffs are particularly ill-timed. Stelco is just getting back on its feet under a new American owner. That follows a tumultuous nine years as part of U.S. Steel marked by layoffs and shutdowns, including an end to steel and iron making in Hamilton. The company still has coke ovens and finishing plants in the city as well as a large steel mill in nearby Nanticoke, Ontario.

Even in its current diminished form, the scale of Hamilton’s industrial district remains impressive. At the same time, the shabbiness of many of its adjacent residential areas is a stark contrast to parts of the city high on the Niagara Escarpment, or “the mountain” as it’s known locally, which are among Canada’s most affluent.

Matthew Green, the city councilor for the industrial area, has undisguised passion for the neighborhood and its history. It seems to be reciprocated.

When he walked into the Galley Pump Tavern, he was immediately recognized by a trio of stevedores who clearly had been spending considerable time toasting the summer weather on its rudimentary outdoor patio. One woman, seeing Mr. Green on the street, honked her horn and offered a fist salute as she drove past.

Mr. Green, the city’s first black council member, has said that three decades of free trade with the United States have been responsible for factory closings and exodus of jobs to the United States, particularly in his city.

Earlier this spring, a 107-year-old plant that made steel for the auto industry closed permanently after going into receivership and another steel maker said it was moving its Hamilton operation to Solon, Ohio.

“With Nafta, a lot of our jobs got sent down south and with them went the prosperity of our neighborhood, so we got hit pretty bad,” Mr. Green said. “So first they came for our jobs with free trade. And now with this tariff announcement it’s like they’re coming for our factories.”